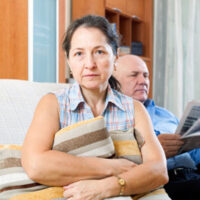 It used to be that you would hear people saying that “half of all marriages” end in divorce. That was never strictly the case, but the divorce rates in the 70s reached epic proportions as fewer Americans saw divorce as a negative prospect. Today, the divorce rate has steadily declined over the years and that has a lot to do with the fact that couples are marrying later in life. That being said, those statistics aren’t true of all demographics.

In fact, older couples are getting divorced at higher rates than ever before. You may have seen memes on Facebook with an older couple pictured. When asked how their marriage survived 70 years (or however long it is), they say that today, if something is broken, you throw it out. But back in their day, if something was broken, you fixed it. While that may be true, it simply doesn’t translate to divorce numbers. Statistically, older couples are much more likely to get divorced than their younger counterparts.

Politics-Inspired Divorces on the Rise

A South Carolina divorce attorney calls this the “Trump Divorce”. The Trump Divorce is unique in American history and perhaps has been fueled by access to social media and online click-bait articles that use headlines to provoke outrage. The political discourse has certainly soured over the past decade and one of the major reasons for that polarization is access to click-bait, fake news, and opinions masquerading as real journalism.

Younger people are less likely to have this problem because they were born and raised in the same system that we have today. For older couples, this is all new. Additionally, people are more likely to marry someone who shares their political views than someone who doesn’t. Marriage was much different in the 60s and 70s where political differences were much less polarizing as they are today.

Couples today are getting married much later in life than former generations. They are getting their degrees and establishing themselves in their careers before choosing to settle down and have children. This has created a situation where today’s marriages are actually more stable than marriages of previous generations. Meanwhile, for Americans aged 50 and over, the divorce rate has doubled in the past 30 years, perhaps also because of online dating services and the availability of other divorcees.

No matter how old you are, not all marriages will make it till “death do you part”. If that’s the case with you, call the West Palm Beach divorce attorneys at Bruce S. Rosenwater & Associates today to learn more about how we can protect your interests as you untie the knot.