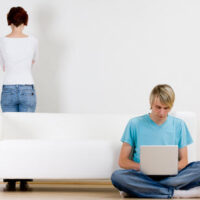 Not everyone across the country is subject to a shelter-in-place order, but those who live in New York City, the epicenter of the disease, are going on the internet, searching for divorce attorneys, and flooding the phone lines with details on how to prepare their divorce.

Yes, the quarantine has been difficult on everyone, but you wouldn’t think that being cooped up with the love of your life would necessarily be the thing that pushed your relationship over the edge. Nonetheless, here we are. Once the courts reopen, you can expect an avalanche of divorces to be filed, some very busy divorce attorneys, and some couples pondering whether absence does indeed make the heart grow fonder.

“People are Realizing that They Can’t Stand Each Other”

One New York divorce attorney put it succinctly when she said: “People are realizing that they can’t stand each other.” But the question that everyone should be asking themselves, is how did the couple get to a point where they stood each other for several years and once they were secluded together, realized it was time for a divorce?

Nonetheless, the courts are closed so the divorce papers cannot be filed and these divorces hang in limbo until the courts are once again reopened and the court proceedings can begin. Ostensibly, however, these couples are now living with their future ex-spouses as opposed to life partners, which can only make the issue more complicated, since now you know you’re going to be around someone all day with whom you have no future.

Were Most of These Marriages in a Difficult Place Already?

While some of the marriages, maybe even a majority of these marriages, were probably on the rocks to begin with, the question remains whether the quarantine has the power to destroy otherwise happy marriages. While some couples are not having a great time right now, we’re not hearing from the couples who are making it work at home with the kids all day every day. It also remains to be seen whether or not couples who have jobs that have been considered “essential” will face the same marital issues as their counterparts in other homes where both partners have seen their work lives stopped.

It should also be noted, that most of the couples who were spoken of by attorneys are hedge fund managers, fashion designers, lawyers and other skilled professionals who are not considered essential workers at this time. Their routines, while impacted by the virus, still include time away from the home. In certain cases, the quarantine has impacted their jobs in the exact opposite way as these New York big wigs.

While these reports are only meant to be amusing diversions, you can expect sometime in the future, when COVID-19 is in the rearview mirror, for sociologists to do a complete study of the impact of the quarantine on marriages and families. It will be interesting to see if those who worked during the quarantine had different rates of divorce than those who were stuck at home.

Are you slowly realizing that the person you decided to build your life with annoys you on a near-constant basis? Well, you’re not alone, apparently. Call the West Palm Beach divorce attorneys at Bruce S. Rosenwater & Associates today to schedule an appointment.