Are the Majority of Divorces Initiated by Women? 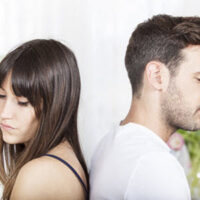 An ongoing trend in the U.S. is that women, particularly white women, initiate the majority of divorces. In 2015, that number was as high as 69%. In recent years, it’s gone down to 65% as divorce, as a whole, trends downward.

Yet there are a number of other factors that go into the decision to divorce that don’t involve the gender of the spouse. In this article, we’ll discuss why women initiate the majority of divorces in America.

According to a 2002 study, women who remained in bad marriages were as unhappy as those who opted out. But a two-decade study done in London indicated that women remained quite content with their situation for up to five years following their divorce.

Children, as well we know, can sometimes forestall a divorce indefinitely. Other times, they may avoid divorce even when there are problems in their marriage. Nonetheless, couples with babies are 24% less likely to divorce than couples without.

Age is Now a Major Factor in Divorce

Those over the age of 50 are divorcing in record numbers. This is likely related to shifting cultural values and greater independence for women. Between 1990 and 2009, the rate of divorce among couples 50 and over has doubled.

Additionally, those who married after 25 are more likely to remain married than those who are married before 25.

Women Are More Likely to Feel “Held Back” by Marriage

While men tend to see marriage as a right of passage into adulthood, women are more likely to feel held back by the marriage. After all, it is the women who tend to sacrifice their careers to raise children. Essentially, the institution of marriage has failed to keep up with societal expectations for working women. Women are now more engaged in the workforce than ever before and are more likely to make sacrifices for their families.

While the gender revolution is still in full swing, men who were interviewed concerning their families indicated that they felt “psychological distress” if their wives brought in more than 40% of the family’s income.

Women are Less Tolerant of Abuse and Neglect

With more financial independence, women have more power in relationships. Those who are not financially dependent on their husbands tend not to tolerate cheating, psychological abuse, or any other kind of abuse, including neglect. Women demand engaged partners who carry the same familial burdens as themselves. The distribution of household labor is thus becoming more even.

If you’re considering divorce, for whatever reason, you should contact a West Palm Beach divorce attorney to discuss your options and protect your interests moving forward. Bruce S. Rosenwater & Associates has helped thousands of couples untie the knot and move on with their lives. Call today for more information.

By Bruce S. Rosenwater | Posted on October 26, 2020
« Couple Takes Divorce Photos to Commemorate Their Uncoupling
Foreclosure and Eviction Moratoriums Remain in Place, But for How Long? »