Retail Bankruptcies Reach Highest Number in Over a Decade 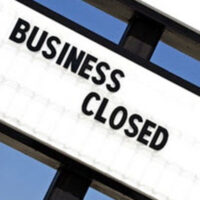 Tailored Brands also announced that they would be filing for Chapter 11 and closing 500 of its 1500 stores. This will result in a 20% overall reduction in the company’s workforce.

The Future of Retail

Retail had been struggling in recent years with the advent of online shopping and the internet. Yet there was enough interest in traditional shopping to keep malls and other commercial landlords in business. However, with so many stores in trouble, and COVID-19 pushing them over the ledge, the fear is that we are seeing the entire collapse of an industry.

Nonetheless, several major retailers have survived; they’re just not making headlines. That begs the question: If so many retail stores are either in bankruptcy, preparing for bankruptcy, or knocking at bankruptcy’s door, what will the economic landscape look like in another decade?

The Immediate Future is Grim

CDC health experts are saying that some form of social distancing will be with us until a vaccine is discovered and ready for mass production. While initial tests seem promising, our most optimistic estimates have us rolling out a new vaccine in the spring of 2021. That means at least another 6 to 7 months of social distancing and mask ordinances.

Typically, when a company files for bankruptcy, they hold liquidation sales to get rid of stock on hand and turn it into cash for their creditors. But for most retail stores, this wasn’t possible during the lockdowns. Now, it simply depends on which state you’re living as to whether or not retail stores are allowed to open. Most states are allowing retail stores to open now, but the volume of customers isn’t the same as the pandemic continues to claim lives.

Next is Commercial Real Estate

The next player in the chain that is likely to see major losses are landlords and mall owners who provide rental space to tenants that are not allowed to open their doors. If current trends related to COVID continue to scale upward, more closings are expected. More fear concerning the virus is also likely to keep several out of public until the threat has passed.

If you’re in an awkward financial position right now, it’s never too early to speak to a West Palm Beach bankruptcy attorney. Call Bruce S. Rosenwater & Associates today to learn more about how we can help you divest some of your liabilities and stabilize your financial future.

By Bruce S. Rosenwater | Posted on September 8, 2020
« Is Bankruptcy in Your Future?
When is it Time to Talk to a Bankruptcy Lawyer? »